Too Much Screen Time: Hype or Reality? 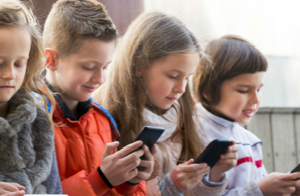 This is currently a very hot topic. With the incredible fast rise of availability of technology devices, in almost everyone’s hands, this question is on the minds of parents, teachers, psychologists, and scientists…could too much time spent be having a negative effect on my child or is it a necessary way to ‘keep up’ and be on par with what everyone else’s children are doing. I have had unsubstantiated opinions based on my common sense so I decided to research and see what studies and research have found.

Interestingly enough, in the early 1960’s, the television set was becoming popular and available to more and more families. At this time, the Federal Communications called the onset of TV as the beginning of a ‘vast wasteland’. Fast forward to today, screen time is not limited to the TV. It also includes Smart phones, tablets, and laptops. The internet and handheld devices especially, have opened the door of opportunity to apps, games, videos, advertisers and millions of dollars of profit. Can’t really blame these companies. The demand is being met by the desire to communicate 24/7, literally in the palm of your hand.

So with this huge fast progression, it is wise to weigh the benefits and the downside to the progress of technology, with an open mind. Without a doubt, how amazing is it to pick up a 3×5 inch box and talk to someone on the other side of the earth?? It is also very convenient to have access to unlimited information on any possible subject by simply typing GOGGLE or asking SIRI. Another rewarding feature is ‘face timing’ with family members. Without a doubt, we are able to stay connected in a way that was never know before. So what could possibly be the downside? If this was the extent of how technology is being used, there would not be a downside. Some not so desirable symptoms and behaviors have been witnessed by parents, teachers, and pediatricians that has led to the question as to how much screen time is too much.

The American Academy of Pediatrics has come up with recommendations as to how much time is safe for children to spend per day looking at a screen. Here are their daily recommendations:

Ages 2 to 5 years- 1 hour of only high quality programs intended to teach.

The American Academy of Pediatrics did not make these recommendations without extensive research. What was found in many children who exceeded these limits were quite a few adverse effects.

These outcomes range from Infants to teenagers. From Dr. Jane Healy’s book, Different Learners, she emphatically states that screens have taken control of our young people’s minds. They become reactive vs reasoning beings. She states, “Four areas of concern relating to overuse of technology have emerged that particularly impact learning difficulties. They are attention, language development, “people” skills, and problem solving/imaginative thinking.” What IF this is true, even partially? Should we as parents be concerned? How about us as part of this society and the future of the next generation? Should we be concerned?

The answer is a resounding YES. It is important to understand that overuse leads to an over dependence that is more than a desire for ‘fun’. Instead there are changes that occur in the brain and especially in the brain of a young person whose brain is not fully developed. One that is easy to understand is the FACT that when a child spends more than 30 minutes per day on a screen device, this causes rapid activity of dopamine production that leads to the body constantly wanting more of that ‘feel good’ hormone. When stopped, causes a sudden drop off of dopamine that results in bad moods, agitation, anger, and tantrums. This same result is seen also in adults in several types of addictions. Dopamine production becomes dependent on the behavior that initially stimulated it. The healthy production becomes dependent on the stimulus that then becomes an addiction.

A side note…my research found the following information: teenage girls and boys tend to express themselves differently. Boys will physically fight when mad. Girls get mean. A preteen and teenage girl has no reason to have a social media account. This is where most bullying is found among girls. Think twice about allowing this opportunity.

The good news is, there are rewarding activities that can be substituted for technology. Here are a few:

In addition to substituting activities, it may help to know what several studies have linked the reason why video games have hooked so many young people, to the point of becoming an obsession. Rather than assuming kids are lazy and defiant, an article from Psychology Today written by Dr. Nir Eyal states that gaming satisfies 3 basic human needs…competence, autonomy, and relatedness. Competence being the need for growth, progression, achievement, and mastery, as found in a challenging video game. Autonomy being the need for freedom of control over the choice to call the shots in a game. Relatedness being the need to feel like they matter to others and others matter to them, being part of a gaming community. It has been suggested that game creators know this and design them is a way that satisfies these needs. Why do you think it has been said the Silicon Valley parents limit extensively their children using technology for entertainment? Of course, there is no way we can agree that video games are a good substitution for other ways to get these needs met. No matter how well a game is designed, it can’t come close to the deep satisfaction that real life and real human connection can provide. No game can give a child the feeling of competence that comes from accomplishing a difficult task on their own. No social media site can give a child a sense of relatedness, safety, and warmth that comes from an adult that loves them unconditionally and takes the time to tell them so. When kids see their parents are not only trying to stop their fun but are instead helping them keep things in the right perspective and in the right proportion, they become allies rather than enemies.

It is time to become intentional and do the right thing for our children. A colleague of mine, Victoria Proody, Occupational Therapist for children, whom I admire very much for the work she is doing to educate parents as to the damage that can be done, not regulating  children’s screen time. She did an experiment with her 10 year old son. There was no technology Monday through Friday and only 1 hour a day on weekends. Initially he resisted. He complained, he whined, he stomped around saying how bored he was. After the first week, he began to look for other things to do with his time. His mom suggested he cook dinner for the family, one night. Little had he known, he began to love cooking, finding new recipes, helping his mom make the grocery list of needed ingredients. Victoria interviewed him after several weeks and he actually thanked his mom for taking away technology because he found something else he loved more. A recent update about her son…he is starting a cooking class for his classmates. That emerged from his mother enforcing his use of technology.

It will not be easy initially. Do what these guideline suggest. Don’t give up and give in. I’m sure, no one ever told you being a parent was going to be easy. You will be glad when you know you are providing the guidance your child needs and the reward as you watch them grow and expand in new ways!

Helen helped me discover what my true passion was and how to live it. I would have not been able to do that on my own but am so grateful I worked with her as a coaching client for over a year. I am on the right track and loving my life that is now fill with meaning and significance...thanks to Helen's ability to totally listen and ask powerful questions that helped me find direction and clarity! While being one of her coaching clients, I also participated in 4 of her MasterMind groups. They elevated my awareness to levels I had never reached. and left me very motivated and inspired.
- Jillian Winn Certified Behavioral Analyst